I’m not ordinarily in the habit of looking inside police cruisers, but as I was waiting to cross the street at an intersection, one pulled up in front of me at the corner, front windows down,…

Source: Laptops in police cruisers: why?

McKenzie tweeted this story from CTV News in Canada, and I had to blog it.

A Winnipeg mother says she was investigated by Child and Family Services simply for letting her children play in her backyard.

Jacqui Kendrick, a stay-at-home mom, says a CFS worker showed up unexpectedly at her door in early April. The worker told her they were doing a “well-being check” after receiving a complaint about her children being left unsupervised.

Kendrick has three children ages two, five and 10, who love to play in the family’s backyard after school. The backyard is fully fenced in, with a wood fence covering three sides, and a portion of the front covered by a chain link fence and gate.

What the hell are you to do if the government rules that you’re dead?

Don’t know if anything has changed in the three years since this story, but it’s still odd, and amusing.

A US man declared dead after he disappeared nearly three decades ago cannot now be declared officially alive, though he has returned home and is in good health, a judge has ruled.

Donald Miller of Ohio left behind a wife, two children and significant debt when he fled his home in 1986.

He was declared legally dead in 1994, then re-emerged in 2005 and attempted to apply for a driving licence.

A judge this week found death rulings cannot be overturned after three years.

Judge Allan Davis handed down the ruling in Hancock County, Ohio, probate court on Monday, calling it a “strange, strange situation”, according to media reports.

“We’ve got the obvious here. A man sitting in the courtroom, he appears to be in good health,” he said, finding that…

“I’m sorry, officer; is not wearing shoes against the law? If not, then it’s not your business why I was wearing socks only!”

This very morning, the police paid me a visit to ask me why I hadn’t been wearing shoes for a couple of days, instead wearing socks only.

Simple; I had an infection in the left toe of my left foot caused by wearing shoes that were too “unbroad” (opposite of broad, not small or tight in all dimensions). The doctor ordered to postpone buying new shoes until my toe had healed. That’s why.

Philosophies of a Disenchanted Scholar 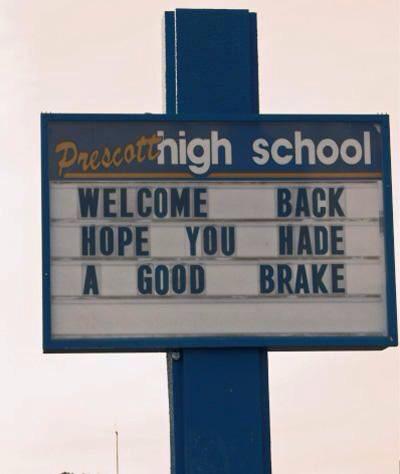 A man disturbed customers by bringing a snake into a restaurant, and management allowed it to stay during dinner because the man claimed it was his “service animal.” “I just started trembling and said ‘We’ve got to get out of here’,” one customer told CNN affiliate KYTV.  After customers told management of their concerns, they were told the snake was a service animal, and would be allowed to stay. According to KYTV a customer approached the man and he told her the snake helped him with depression.

I love this guy.  Mocking the absurdity that has come to be called ’emotional support service animals’.  It helps with his depression because who wouldn’t be constantly chuckling as they tote around an emotional support python (or gerbil or hamster or goldfish or lizard or fly or toad or tick or lice or whatever).

A Cornwall family is defying a city order to stop two kids from selling worms on their front lawn.

Clayton, 8, and Kristopher Cadieux, 10, started their business last summer, digging up worms and selling them as bait for $2.50 per dozen.

But after a complaint from a neighbour, the brothers received a note from the city saying they were breaking a bylaw and had to shut down their business.

Good on them, and their parents, for their defiance.

Will S.’ Sunny Side Blog

Will S.' Anarcho-Tyranny Blog
Create a free website or blog at WordPress.com.